I would like to start out this review by saying that I am not a fan of Burger King. I think that it’s overpriced and over-hyped. If Burger King is truly the king of burgers, then this meaty monarchy must be ruled by it’s queen, Wendy’s. And no, I am not being paid by the latter to bash BK (although throwing a Baconator my way wouldn’t hurt). So when my friend wanted to eat at Burger King, I had my doubts. But I agreed because why not? I haven’t eaten at BK for a long time and I’m always ready for a burger to change my mind. So without further ado, here is my honest review on BK’s 3-Meat Whopper.

Let’s start things off with what the menu board showed the burger was gonna look like:

Well, damn, that looks tasty. I wasn’t really impressed with their regular whoppers (they were more like hmmm-ers), so I debated between this and the 4-Cheese Whopper. 3 Meats or 4 Cheeses? Eventually, my tummy decided that it wanted more protein that day and so I ordered the burger a la carte which cost me Php160.

The burger was made fast and since I was famished, I quickly found my seat and unwrapped it. Let’s take a look at what’s under the paper: 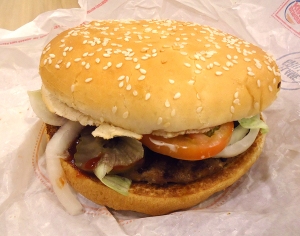 Hmm, not bad. I’m not so naive as to actually believe that what I’ll get was something that looked like the menu picture, but I was a little disappointed that the burger wasn’t taller. The burger itself was hefty, probably the same size as Jollibee’s Champ. Now let’s see what’s inside: 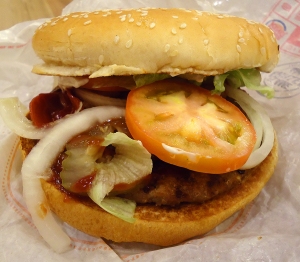 I don’t like tomatoes on my burger, but I decided to let them stay because they filled out the burger more and I was really hungry. As you can see, a few slices of lettuce, some misplaced onions, and the 3 meats: bacon, pepperoni, and the beef patty.

The first bite was good. It was great to finally be eating a big burger again. The flavor carriers where the pepperoni and the bacon, while everything else complemented the meat. Here’s another look at the insides of this burger: 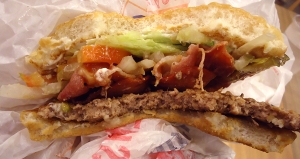 The taste was really good because the meat and the veggies went together astonishingly great. However, I couldn’t really taste the Whopper patty. My big gripe about BK is that their (astoundingly thin) patties are really sub-par. They just don’t have that unique taste that patties from other fast-food places have. It is easily overpowered by whatever you pile on top of it (which in this case is the pepperoni and bacon). I’m not saying it’s a bad thing because this burger actually tastes good, but it just doesn’t have something special that makes it unique as the Burger King.

To conclude, Burger King’s 3-Meat Whopper is a good-tasting burger.

Maybe if Burger King would change up their Whopper patty recipe and make it thicker and more flavorful, I’d be happier with my purchase. But it was a good experience. I’ll most likely come back to eat again after a couple of years. I hope by then their Whoppers are capable of really “Whopping” me.

I blog to remember the good times. View all posts by jaiguzon

What are you thinking? Cancel reply