I’ve set two (2) climbs this week that were sadly cancelled because of the storm currently ravaging the country. Because of the harsh winds and heavy rainfall, safety of my hike-mates was paramount.

Ironically, on the morning of the cancelled hike, there wasn’t a single drop of rain visible. Just my luck, I thought, once again the universe plays its games with me. I already had other plans for the day, so when rain actually happened, I was relieved.

Ah, the postponement of the climbs are finally justified.

Anyway, on the running side of things, I have to confess that I haven’t run even once this week. Of course, I place the blame on the bitchy weather this country is having. It’s been raining constantly every time I finish work so my evening runs have to be cancelled. And just the thought of early morning runs already sends me into a pseudo-comatose state. I simply do not have the mental fortitude to wake up early and run.

Who likes running with wet shoes and socks anyway? I contemplated running barefoot, but I’ve already contracted Leptospirosis before and I don’t want to risk repeating that affair again.

But fret not, I plan to fix this derailment of my training next week, where I have decided to get running, rain or shine. I just have to suck it up and get to it. Ain’t nothin to it but to do it!

To add more accountability to my running, I’ve signed up for two (2) fun runs this September. I figured the cause of my lack of mileage this month was due to not signing up for runs. I tend to be complacent in the absence of pressure. So, join me? #BoysWhoTakbo 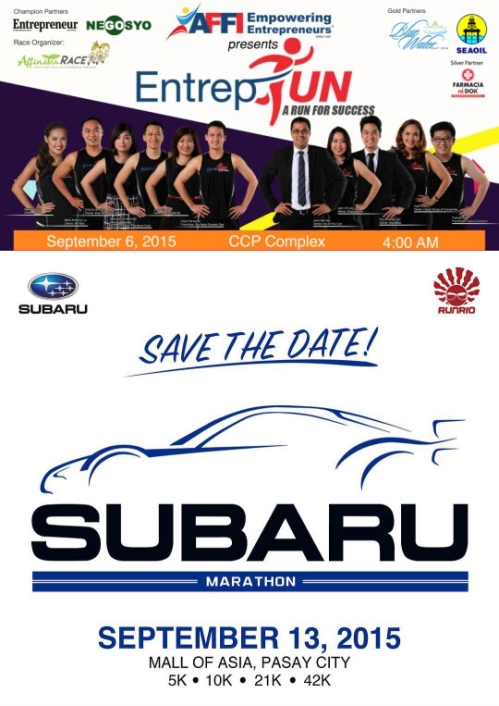 In gym matters, after nursing a cold for almost two weeks (caught it when I biked home in the rain. Again, fuck you, Philippine weather), and also getting in only one (1) gym session last week, my lifts have been a bit below-average.

I’ve been on maintenance mode since June to focus on my running and biking, so it’s been a while since I’ve seen any PRs. Thankfully, my strength hasn’t degraded into that of a baby’s so I’m content with it.

We just have to learn to sacrifice some things in pursuit of other things. But once my October run is done, you can bet your butt I’ll be hitting the gym hard again.

Late this week, after two (2) weeks of non-squatting, I was able to get under the bar again. Going heavy might not be the best idea after a couple of weeks of going squat-less, but I was able to finish. But for the last two (2) days, I’ve been getting reacquainted with DOMs. My walks have been reduced to the old man shuffle and sitting down as well as standing up have been a bit challenging. I love the pain though, it makes me feel like my muscles are working overtime. Embrace the suck.

Furthermore, local celebrity and PBA courtside reporter, Sel Guevara was in my gym one night. It’s my first time seeing her there and I was starstruck. At first I was doubtful it was her, but after looking at her IG feed, guess who was at the background of her video:

Yep, I’m now a background extra! I excitedly added that to my resume. Anyway, follow Sel Guevara in her blog, where she’s a much better fitness blogger than me. Maybe some day if I catch her again, we can get a picture together to commemorate our fitnessblog-ship.

Any of you still there? Good. In hiking matters, I found my Sandugo sandals. This makes me happy because instead of buying new ones, I can just use these until they quit. Sandugo is a reliable brand and I know I can squeeze more mountains from this pair.

This purchase decimated my economy and from here on out, I am officially in recession. But I just can’t wait to climb a mountain to field test this bag. I’m so fucking excited and I’m already thinking of viable mountains for next weekend.

So lately, things have been a mix of ups and downs. But mostly, it’s been good. All of the changes needed to progress are all within me and doable. Like always, I just need more discipline to go to bed early and not waste time. October is fast approaching so efficiency is key.

Lastly, I’ve decided to venture into the world of supplementation. My daily dose of medication has just been Vitamin C in the morning and Fish Oil at night. But now I’m giving a chance for supplements to wow me.

In that light, I’ve purchased two (2) brands of supplements: Revicon and Enervon

I’ll be taking one for a week and take note of my evolution. And after that, I’ll take a week’s break to give my body a chance to normalize, then the other brand for another week. I’ll take note of results and adjust accordingly.

We’ll see if there’s any improvement while I keep my training schedule consistent. If not, then there’s always steroids. That’s a joke. Haha.

So, how have y’all been? Always train hard and recover harder!

p.s. I had a free fitness check at a gym franchise today and got acceptable results. I have pretty much normal results but with low visceral fat levels.  I’m at 12.1% body fat, which is good considering I’ve been stuffing myself with food all week long. Looking to get heavier while maintaining a healthy level of body fat. I see more eggs and chicken breasts in my future!

I blog to remember the good times. View all posts by jaiguzon

What are you thinking? Cancel reply